So how does ginseng taste? The first flavor when you put a little piece of the root in your mouth is bitterness, but it’s not too intense of a bitterness. A bit of that bitterness lingers the whole time, too. Then there’s also an earthy sweetness, similar but not the same as carrot – a not so sweet carrot.

Do not eat an entire root in one day!

Eating too much ginseng is probably bad for you. My son ate a whole one when he first started digging. He didn’t sleep for two days and he said it felt like his heart was going to jump out of his chest. This is not a good thing, so don’t do it.

We usually chew a small piece, like you see broken off in the photo below, all day. Just tuck it on the side of your jaw, don’t chew it like gum. Squeeze it every once in a while with your tongue against the roof of your mouth, or gently between your teeth, and put it back on the side.

When you want to eat or get tired of keeping it in there, put it on a plate or somewhere that you can go back to it later. As long as the bitter flavor remains, it still contains ginseng goodness.

Some people use the root in broths. I’ve ground some and used it in my coffee. I really like it that way.

Most of the searches that bring people to this site are about how to find ginseng. Not so many seem to wonder about how to use the ginseng itself. I think most are only interested in exploiting the root for profit.

We don’t dig our roots here to sell because we don’t have enough of it yet. When the population reaches a sustainable level (at least 100 plants of mixed ages per colony) we’ll harvest roots, but that’s going to be years down the road from now. Right now the focus is on habitat restoration.

In our Wild Ozark™ Nursery, though, we do plant extra seeds so I can sell rootlets and potted ginseng plants to others who want to grow it. It makes a pretty potted plant or specimen feature in shade gardens. We also offer companions to make the habitat complete.

The Ozark’s own best-selling author, photographer, consultant, and herbalist Steven Foster posted at his herbal blog about the issues he sees with the television show “Appalachian Outlaws”.

My hope is that some of the people who come here searching for information because they’ve watched that show will become interested in the plant and shift their focus from the potential money in digging to a concern and desire to help it survive.

I wrote a short book called “Sustainable Ginseng” with information on how land-owners can grow it in a way that’s indistinguishable from true wild. Grown this way it can be used for personal remedies as I describe below, or sold just like wild – all without adding extra stress to the survival of the plants still holding their own in our hills.

Some of our books:

For the most part, I just study the ginseng and grow it. I get a lot of enjoyment from finding new plants, growing new colonies, and just observing grandmother plants with her babies throughout the growing season. But every so often we do dig a few for our own personal use and I thought I’d talk a little today about how I use it. Dr. Laurell Matthews wrote about the virtues of ginseng root on her Natural Health blog the other day. The last time we dug any of our own was a few years ago. I keep the roots in a paper bag along with the other herbs I’ve harvested for household use.

How We Use Ginseng 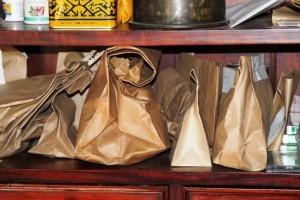 When I take out a ginseng root I put it in the little ox-bone box pictured at the top of this post and keep it in the kitchen.

My husband got that little box for me when he was in Iraq or Afghanistan and I think it makes a fitting resting place for a single root of a plant I hold in high regard.

That same root has been in the box for several months because I don’t use it every day. If I’m working on a project that requires more concentration and focus than I’m ordinarily prone to, I’ll keep a little piece of the root in my mouth all day.

I take it out and set it on the side of my plate if I eat or put it down somewhere if I’m having a cup of coffee, but I keep the same piece in use all day. It’s sort of like keeping the same piece of chewing gum, I guess, but I don’t actually “chew” the root.

Every once in a while I’ll bite down on it to squeeze the juice out of it. Yes, I know that sounds pretty gross, given that the juice is made from my saliva, ha. But the saliva is also extracting the goodness of ginseng while it sits on standby in my mouth.

If I think I have a cold or other illness coming on, I’ll use it the same way. Ginseng is an adaptogen and will try to help the body overcome stresses of any sort. This is also what I’ll do with it if we’re doing some sort of work that is physical and I want to maintain stamina throughout the day (like when we’re working on a fence project).

If you’re interested in growing your own virtually-wild ginseng and need some help figuring out where to plant, take a look at our books. By learning the ginseng companion plants, it’ll help you find the best places to plant.

8 thoughts on “So How does Ginseng Taste?”