I have a mystery plant to decipher. Last year I went to the woods and took a root division of a plant I wanted to grow in the Ginseng Habitat Demonstration Garden. I put that root cutting into a pot and placed it in a sheltered spot in one of my nursery terraces.

The summer faded away and fall came around. One day I went out to the nursery spot to check on the plants I’d tucked in for the season.

That plant I’d divided and potted was on the ground.

I re-potted it. Checked on it again the next afternoon.

On the ground, bare roots. Again. Something – most likely a squirrel – did not want that plant in that pot.

By now I’d forgotten which plant it was. And of course I forgot to label the pot. I can’t even remember which plants I’d taken cuttings from during the year, but I have a few possibilities to choose a “most likely” candidate from. Now it had become a mystery plant.

I know it’s not ginseng and I know it’s not bloodroot or goldenseal. Those are three I can recognize on sight, with or without leaves. It could be doll’s eyes, black cohosh, or a fern of some sort. Or some other interesting plant I found while out taking a walkabout in the woods.

Anyway, I put it into the pot again, covered it up with soil and leaves, and brought it into the house. Foiled the squirrel, finally. But I still don’t know what the plant is.

It began to unfurl the other day. Soon I’ll have the answer to my mystery – unless it’s doll’s eyes or black cohosh. I still have a hard time telling those two apart until the plants are mature. But at least the choices will be narrowed down.

Here’s how it looks today. Watch this page if you want to watch the mystery plant unfold, too. 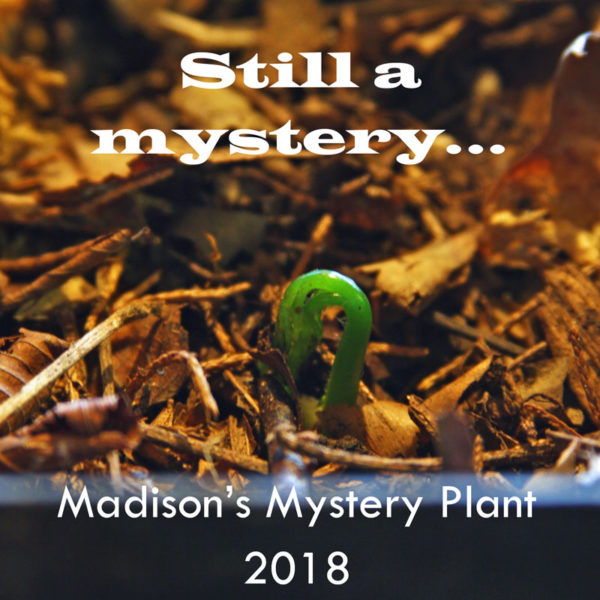 Now it’s beginning to look like something, but I still don’t know what!