I get questions from readers often, mostly about how to find ginseng or to ask for help in identifying whether what they’ve found is ginseng or not. Right now, though, people are asking “How does ginseng look in fall?”

Many are surprised to learn that it changes colors with the season. Here in the Ozarks, our ginseng can start turning yellow in late September. This year, colors seem to be running a bit later and it’s only just now beginning to turn. Today is Oct. 5.

All photos are available as signed/numbered prints up to 8″ x 10″ for $30. Click on “Contact” in the menu to inquire.

How Does Ginseng Look in Fall

Most of the time by October the berries have long since fallen. I found one plant today with a berry still clinging.

I find American ginseng to be a beautiful plant all year, but sometimes near the end of her growth cycle she takes on a certain glow. It looks as if this mature 4-prong is basking in her golden year-end, even if she does look a bit worse for the wear:

When native berries are planted, or at least seeds purchased from a grower of a similar ginseng, there is no visual difference between the roots of our wild and “wild-simulated” except that the seed was placed in that spot by a human, rather than falling from a mother plant or carried by a bird.

There are some visual differences in different varieties of ginseng, although most of the people I know with knowledge of ginseng claim there is only one variety of ginseng and that it has no other iterations. From what I’ve seen, though, ginseng that grows in some parts of the country have longer flower stems and the berry clusters are held high above the plant.

Our native ginseng berry clusters are usually closer to the leaves. I would notice an unusual-looking plant in our habitats. I would know it wasn’t wild if I had used seeds from those with the taller flower stems. Unless you can see that the plant isn’t a local variety, without genetic testing it would be impossible to know what is true wild and what is wild-simulated.

Wild-simulated is planted in a way to mimic nature, in groupings or small colonies in habitats that would ordinarily support wild ginseng.

This is not the same as “woods grown”. Woods grown is grown in the woods in places wild or wild-simulated would also grow, but usually in rows or beds or swaths to make harvesting easier. Woods grown is also sometimes planted in tilled beds or treated with fertilizers or herbicides and pesticides.

Here’s the same plant later in October of the same year:

The Companions Change in Appearance, Too

Blue cohosh can’t even be found by this time of year. It’s already died back and withered into the leaf cover.

Doll’s Eyes (White Baneberry), or Actaea pachypoda, has ripe fruits still waiting to drop onto the ground. You can see how the common name was derived, though a doll with those eyes would be pretty freaky looking. 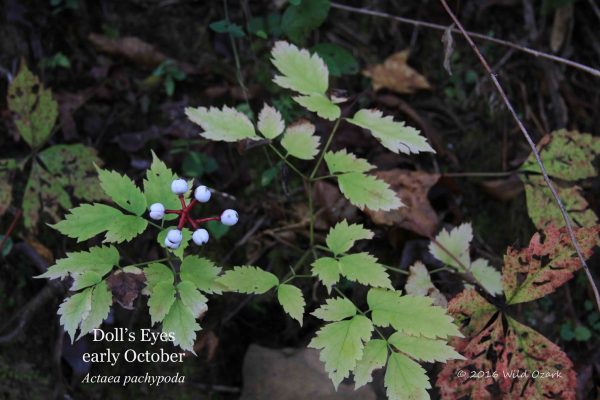 Bloodroot is getting harder to find because many of them have also returned to ground, but here and there a tattered leaf remains to mark the spot: 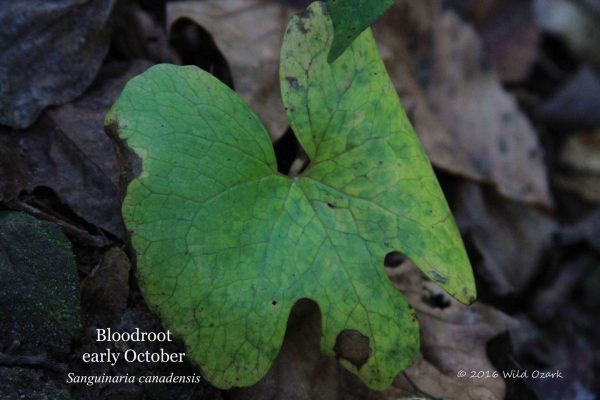 Here’s goldenseal on the 18th of October:

Rattlesnake fern questions what all the fuss is about. This one is putting on seeds (spores) as if nothing unusual is happening. These and grape ferns never die back, but sometimes a frost will give a bronze cast to the ground-hugging fronds.

Even the Look-Alikes Change Colors

The Virginia creeper mimics ginseng all year long, even in early fall. But in late fall it comes time to show true colors. It turns red sometimes later on, which ginseng never does. 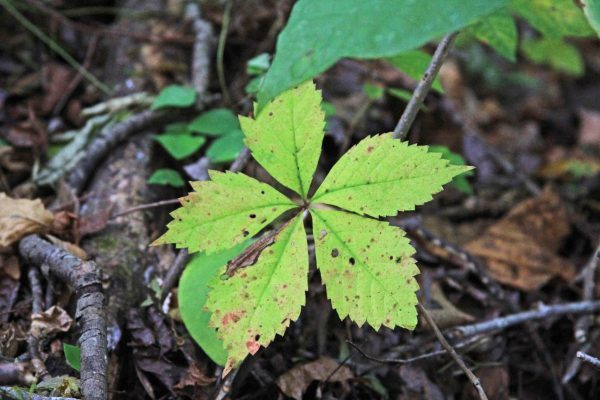 This Ohio Buckeye leaf is stunning in red: 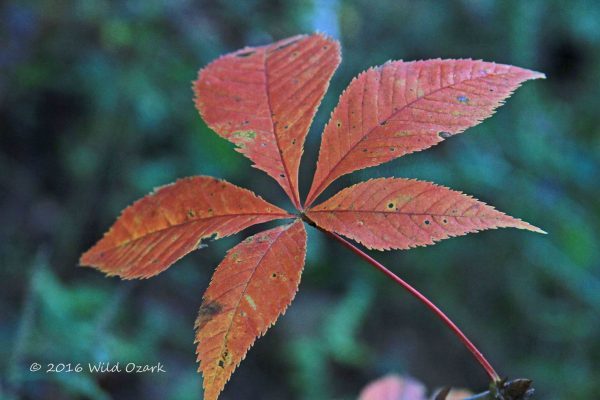 Thanks for stopping by!

I hope you’ve enjoyed your tour through the ginseng woods with me today. This little hike actually took place yesterday but I’m just now getting around to making the post. This morning it’s raining.

1 thought on “How Does Ginseng Look in Fall? Here’s how it looks in the Ozarks in October”