There’s a Virginia creeper  (Parthenocissus quinquefolia) seedling creeping up toward the light in my spleenwort fern (Asplenium platyneuron) container. I watched it for a few days with a suspicious eye as it unfurled, because I thought it might be a poison ivy.

This isn’t one of my favorite plants. I’m only fascinated with it because I’ve never seen the creeper at this stage before. Actually, I did get online to make sure it wasn’t something else I suspected it could be, but the seedlings of that other plant look nothing like the seedling growing in my pot. 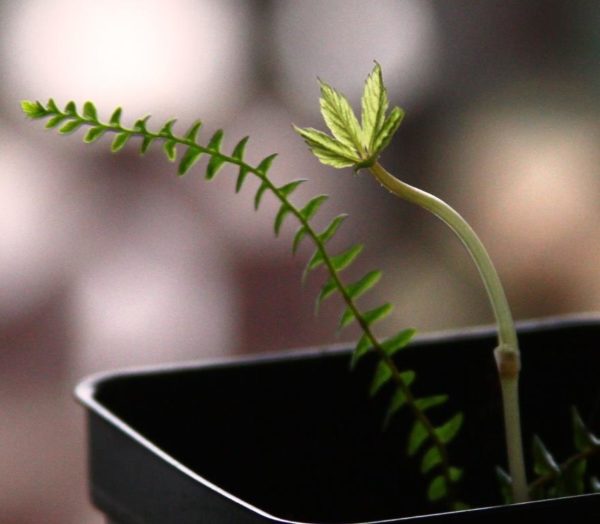 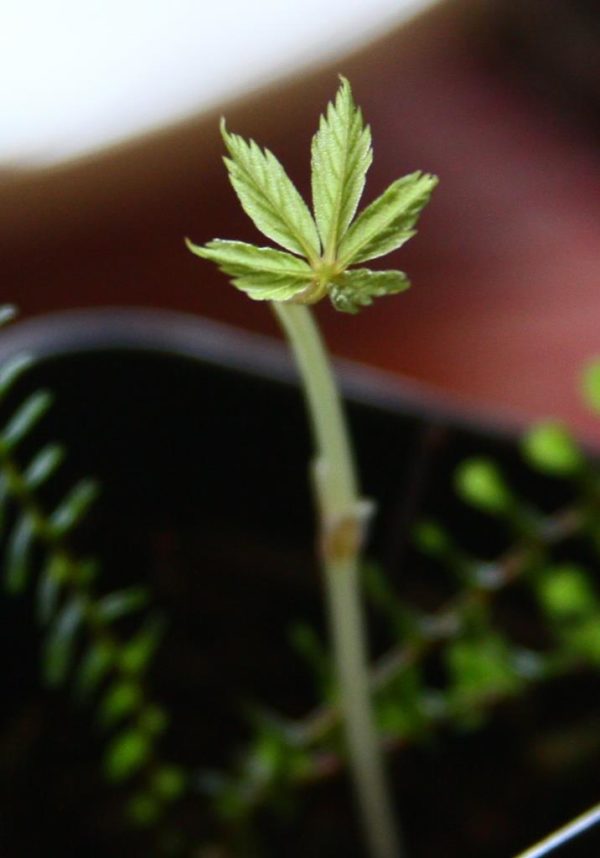 I think I’ll keep my little seedling and bring it with me to my market booths for show and tell. But it’s going to have to get in its own pot soon.

I need the little fern in its own pot, free of the creeper. These little ferns are called Ebony Spleenwort, and they adapt well to the fairy gardens in globes, bowls, and other containers. I do love these. They’re very plentiful here at Wild Ozark, but I’ll begin propagating them in woodland beds this year. That’s more sustainable than taking them from their wild homes.

Any plant with ‘wort’ in its name was once used for medicine. This fern was used for promoting menstruation and for chest congestion. The leaves are supposedly used as a tea. I have no plans to experiment with remedies using this plant. I like it for the fairy gardens mostly.

The other day I spotted some male flowers on the witch hazels down at the creek, but I didn’t have a camera on hand. I’ll try to get some pics of those before they disappear. That, too, is a new thing for me. Until Steven Foster posted his photo of one on FB the other day, I didn’t know witch hazel even had male and female flowers.

I think I may have missed the female witch hazel flowers on the vernal variety. I’m not sure how that happened, since I pass them everytime I go to town, but maybe I have been less attentive than usual in February. Or maybe they bloomed earlier and were knocked off by rain before I had a chance to see. No telling. I’ll try again next year.

Find us at the Fayetteville Farmers Market

I’m so excited! We just got the approval notification for our application to the Fayetteville Arkansas Farmer’s Market. This is a juried market. Last month we had an appointment with the review board. We brought our crafts for inspection – the fairy houses, fairy gardens, forest folk, and keepsake boxes. We have another review for the syrup and ginseng/woodland plants, but those are also fairly unique and so should be accepted as well.

The schedule? That I don’t know yet. Early in the season we’ll likely be there every Saturday starting March 31. Later in the season, they may boot us out to give space to the more tenured vendors with produce just coming in. Watch my schedule page or email me to inquire if you need to know whether we’ll be there on any given Saturday.

4 thoughts on “Virginia Creeper Seedling in my Ebony Spleenwort Fern”