An updated and reposted article, originally written during winter of 2015. Join us as we go digging goldenseal. It’s the middle of winter right now and the best time to propagate this valuable medicinal herb.

Hydrastis canadensis, or goldenseal, is a medicinal herb native to eastern United States. It is a ginseng companion plant, meaning it is often found growing alongside ginseng and the other companions in the same habitat. This photo shows what a mature plant with fruit looks like. 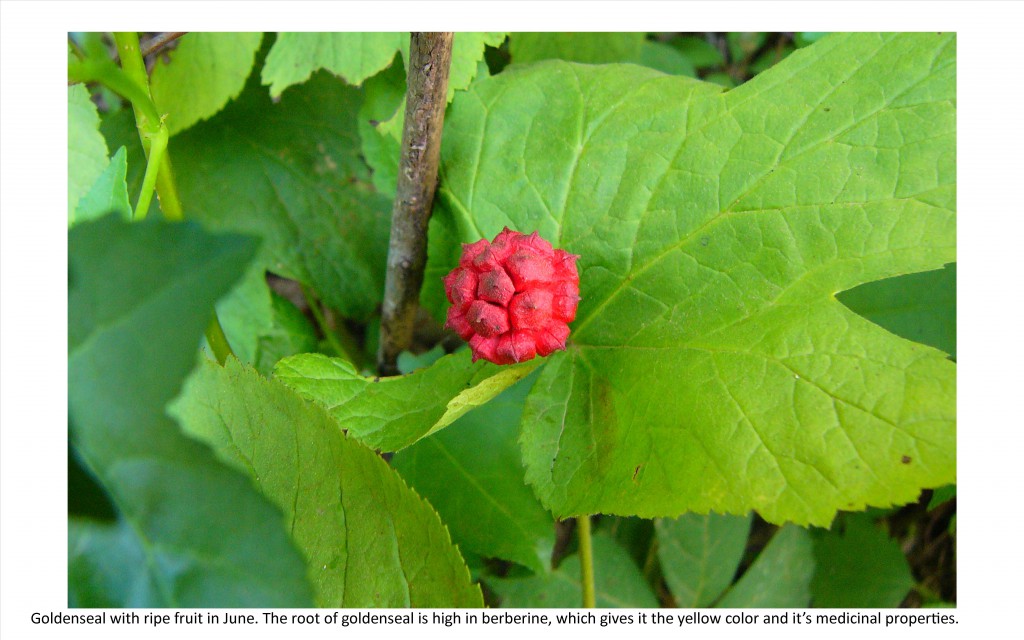 Although still plentiful in the Ozarks, it is sometimes rare in other places. Goldenseal is a CITES listed plant, meaning that the root is under strict export regulation to keep it from becoming more endangered.

Goldenseal is easy to cultivate and tolerates more sunlight than American ginseng, but still has fairly narrow habitat requirements. It grows in eastern United States in mixed hardwood forest where the soil is loamy and the shade is dense.

Ours grows under a hickory, oak, beech, maple, redbud mix. It doesn’t grow where only the oak and hickory grow. The leaf mat under only those trees is too dense for the buds to push through in spring.

There’s also a lot of fungal mycelia present in the areas where the goldenseal grows. In some areas there is white mycelia, but in the spot where I went today only the orange was there.

The air is cooler in the moist woods where this plant grows, because of the shade and ground moisture. It also likes the same sort of leaf cover on the ground that ginseng does, but it can grow in more sunlight than tolerated by ginseng. Goldenseal enjoys the company of the other ginseng companion plants, such as bloodroot, wild ginger, black and blue cohosh, etc.

I suspect the reasons it is still on the endangered list is because of exhaustive harvesting techniques and habitat destruction due to logging and development (the same reasons ginseng is endangered).

Digging goldenseal can be easily done in a sustainable way. It’s important to leave some of the larger plants to continue seed production. But the plant propagates easily from rhizome division, too. If diggers would simply replant some of the roots when they’re digging goldenseal, it would help the plant rebound.

When properly harvested, a goldenseal colony will rebound with even more plants in the colony than existed before harvest. When exhaustively harvested, the digger takes all of the older plants and as many of the smaller plants as possible, leaving only very tiny rootlets behind for replenishing the colony, which takes at least three years to grow to seed-producing maturity again.

It’s the middle of winter right now and time to propagate so we have new plants to sell at the market in spring. It’s also the time to dig goldenseal for its medicinal virtues. Here at Wild Ozark we never practice exhaustive harvesting of anything, except of the vegetables in our kitchen garden. I’ll be taking special care not to dig more than a few of the mature goldenseal plants and will only harvest from a small area at a time.

Bare-root plants (rootlets) are available October through the end of November. We’ll have potted plants available in spring for local customers, and I start shipping them to mail-order customers in May.

Going out to Dig

Come with me up the mountain to find the goldenseal hidden beneath the winter blanket of leaves.

Here’s the view before we start up the mountain. Our own road up there is washed out so we have to go through the neighbor’s field to get there. We’re always very careful to make sure gates are securely closed behind us so the cows and mules don’t get out.

Getting ready to start up the trail. It’s pretty steep and this old logging road switches back a few times before we reach our own road. If I were walking all this trip, by the time I got there I’d be too tired to be digging goldenseal!

There’s a tree with oyster mushrooms on it by one of the gates.

Now we’re on the level where the goldenseal patch grows and you can see through the trees across the same valley we looked across earlier. There’s a colony of rattlesnake or grape ferns already beginning to grow. These two ferns look very similar to each other and until it sends up the spore frond I don’t know which is which. The bronze one was probably up before the last frost and the cold turned it bronze. I am not sure about this, but that’s my guess. If you know why some are bronze and some are green, please do tell. 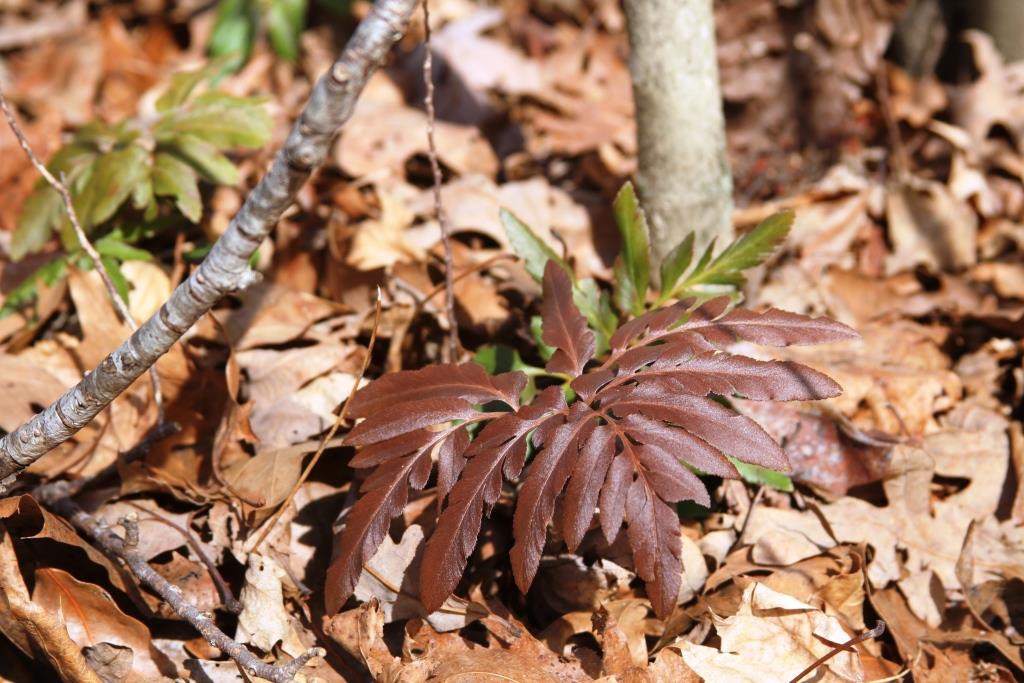 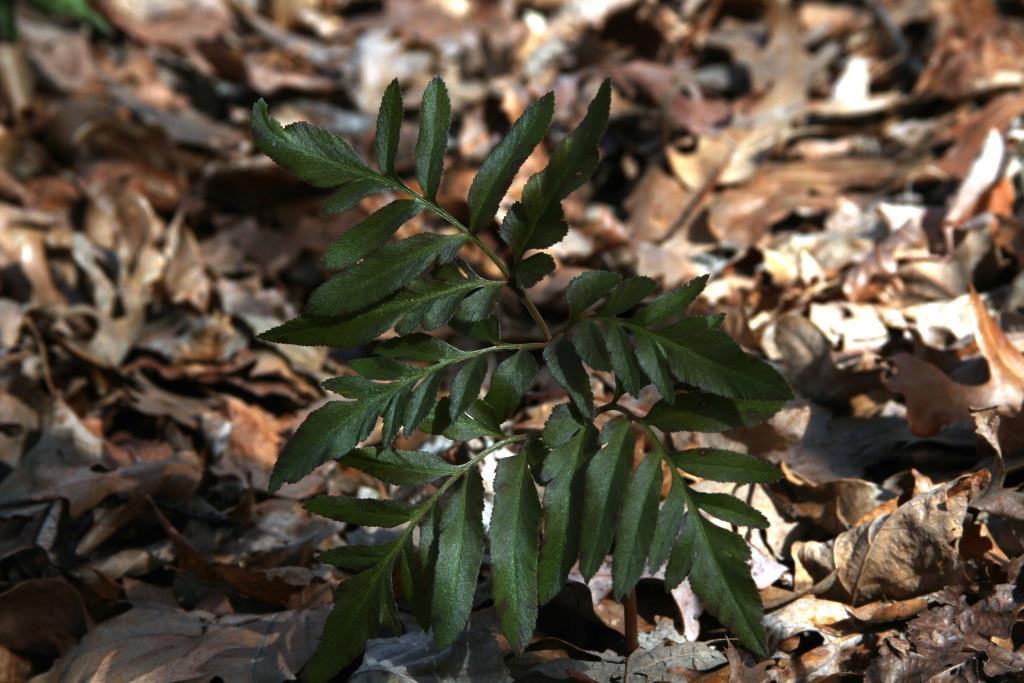 Since it’s winter, none of the goldenseal is growing yet and all of the tops have fallen away to molder along with the tree’s leaves. It would be hard to find except I have a pretty good idea where it is. This stack of rocks marks a spot where I’d planted ginseng and goldenseal years ago.

All you can see on the ground are leaves from last year and here and with bits of moss on the rocks for greenery. But in the right spot, when the leaves are brushed aside, the goldenseal buds proclaim their presence with bright gold buds. My first attempts at finding it were not successful, but once I moved farther away from the rock stack I found them.

Here’s pictures of the roots after bringing them up. The larger ones will be divided. Everywhere there are roots coming off of the main rhizome is a spot where I may divide. Goldenseal is a plant that comes back even more plentiful after being dug. One year someone had stolen the entire patch, or so it seemed. An old timer in town patted me on the shoulder and said “don’t worry, it’ll be there next year”. Boy, was he right. It was back and twice as plentiful. The only drawback is that the new plants are younger and may not be large enough for selling as roots for medicinal use for a few years. 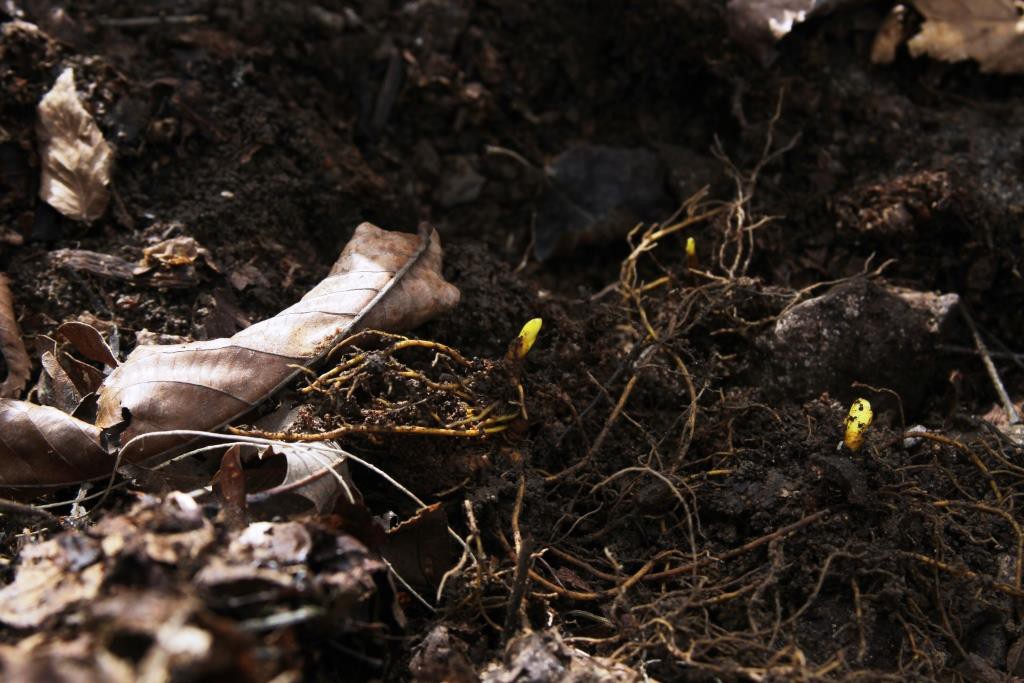 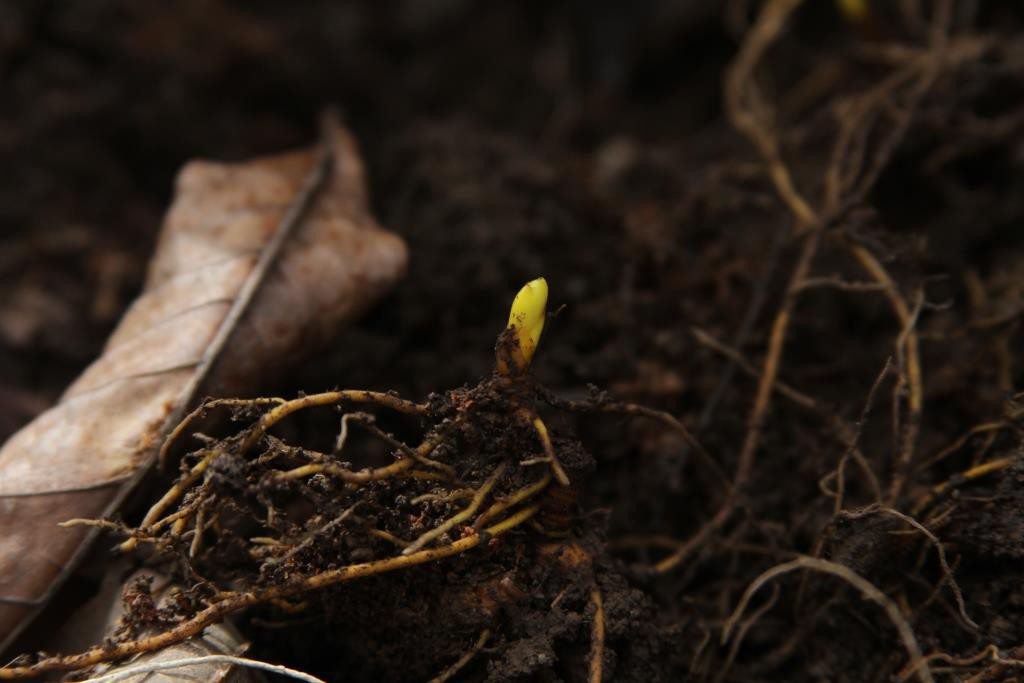 After gathering enough to plant and pot up in the nursery I headed back home. I only gathered some from the area where I knelt on the ground in that one spot. There’s several hundred more of them, possibly a thousand or more, biding time until spring calls them forth to unfurl in the light.

I have this post as a free downloadable information sheet on goldenseal at our Wild Ozark online shop. The photo above of the goldenseal in fruit is a photo in the book and an image from the DVD that comes with my book (while supplies last), “American Ginseng & Companions“. There are photos of goldenseal unfurling in spring in my Kindle picture book “Into the Ginseng Wood” collection, in the chapter of that series (“The Unfurling“) posted to Amazon.

Here’s a short video clip that shows the goldenseal with red berries in summer:

Goldenseal with Red Berries is the first in a collection of American Ginseng & Companions photographic prints available from Wild Ozark.

Here are some links to other websites about goldenseal: